We love all sorts of dog breeds here at Homes Alive Pets, even the weird dog breeds. From the Finnish Spitz and the Cesky Terrier to the Thai Ridgeback--some of the rarest dog breeds make for great family pets! Take a look at 15 of the strangest, most bizarre-looking dog according to the American Kennel Club. In the end, you will find there's often more to them than first appears including traits like webbed feet! 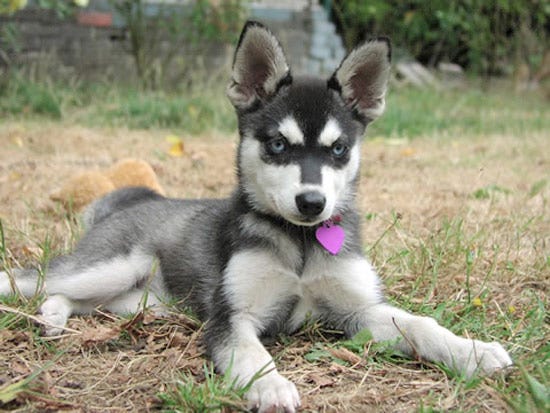 Alaskan Klee Kais look like pretty normal at first glance, but there's something odd about this little breed of dogs - their size. Alaskan Klee Kais look almost exactly look like Huskies, but they only reach a maximum height of 17 inches. As one of the more unique dog breeds, they were actually a breed originating from Huskies, American Eskimos, and Schipperke dogs in the 1970s to create the Husky look with diminutive size. According to the American Kennel Club, this breed is wary of strangers but very friendly. 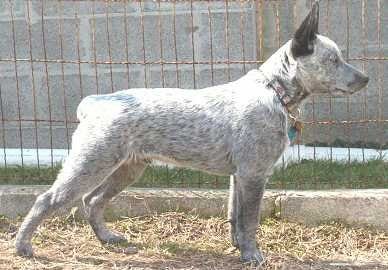 Remind you of anything? This stump-tailed dog is another breed doppleganger, but this cattle hound isn't as much of a thief as you might think. The Australian Stumpy-Tail Cattle kind of Dog breed has actually been recognized as a breed for almost 50 years longer than the Australian Cattle Dog, and is additionally well-known as a herding dog.

And that's not a docked tail you see! When this breed has a tail, it is no longer than 4 inches long. 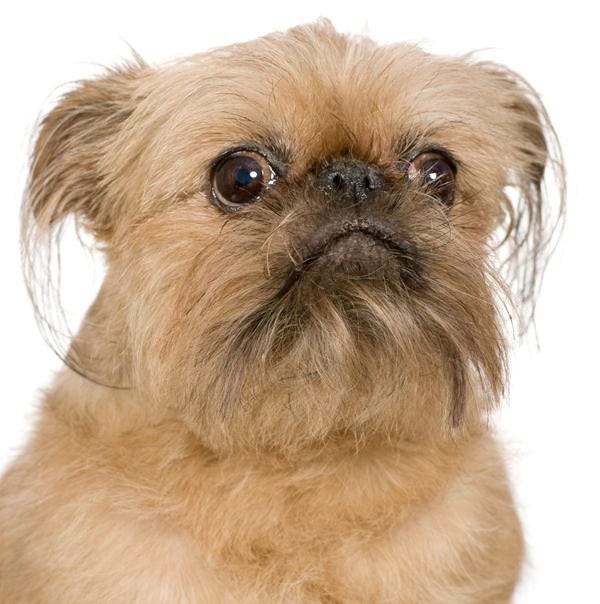 These furry friends looks like they belong in a Star Wars movie. But there's more that is strange about Brussels Griffons than just their appearance. Brussels Griffons are very difficult dogs to breed. Despite their small size, they often need Caesarean sections. 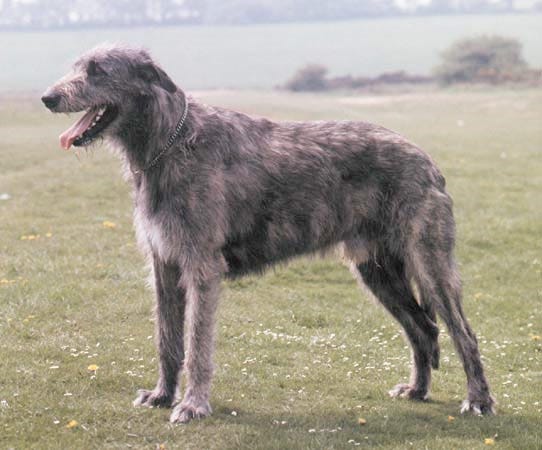 It's a wolf! It's a horse. It's a...weird breed dog? Irish Wolfhounds make our list because of their extreme size. The tallest dog breed, Irish Wolfhounds can stand up to 7ft tall on their hind legs. That's taller than most men! Irish Wolfhounds benefit greatly from a large amount of exercise and make great guard dogs thanks to their size. 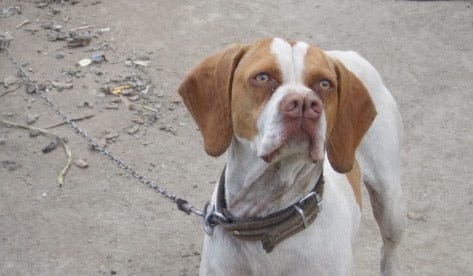 If noses were a competition, the Catalburun dog breed would have everyone beat. Catalburun have what's known as a split nose and are only one of three weird types of dog breeds to have them (the other two are the Pachon Navarro and the Andean Tiger Hound). And it's not just for show, either. The Catalburun has one of the best senses of smell of the pointer and hunting breeds.

You may know this dog breed better than the Mexican Hairless. The name Xoloitzcuintli is Aztec, making this dog the oldest breed in North America. The Aztec people believed it to have healing powers. Not that far-fetched considering the modern studies linking family pet to health benefits. These dogs are hairless, except for the occasional tuft on their head or tail. 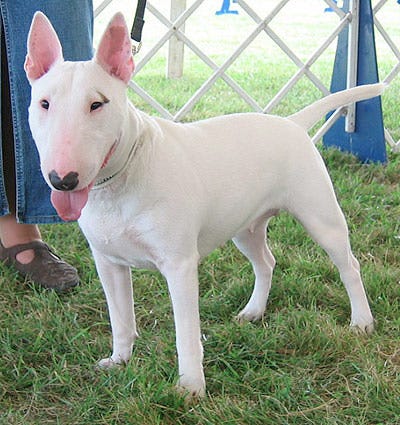 Bull Terriers are probably one of the most recognizable strange dog breeds on our list - especially if you watch Canadian Hockey. But this breed has such a unique appearance, we couldn't skip it. One of the Bull Terrier's most remarkable features is its triangular eyes. Bedlington terrier is the only rare dog breed to have them. 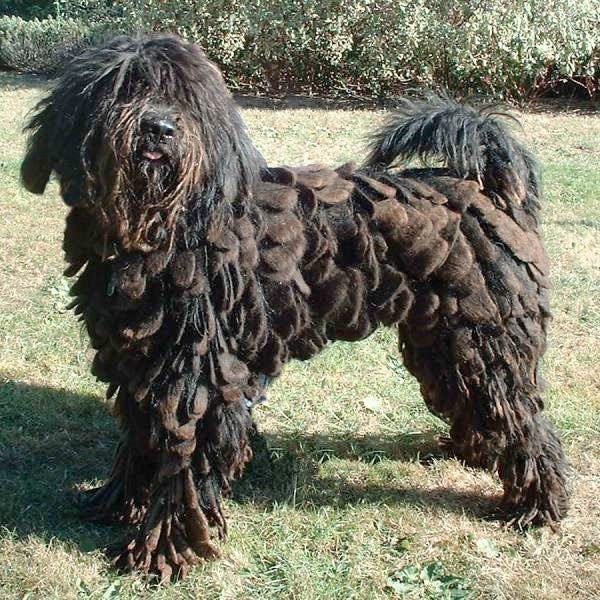 While this dog may look like he needs good grooming, he's just acting naturally. The Bergamasco Shepherd has a coat with natural dreadlocks. The Bergamasco sheepdog has three instead of the two usual coats, which are prone to developing mats. While these unique physical features may seem like a disadvantage, Bergamasco's hair has served it well over the 2000 years of its history. Acting as camouflage, insulation, and a shield for the sun's rays, this alpine sheep dog's hair deserves its place. Because of their size, Bargamasco Shepherds are excellent guard dog. 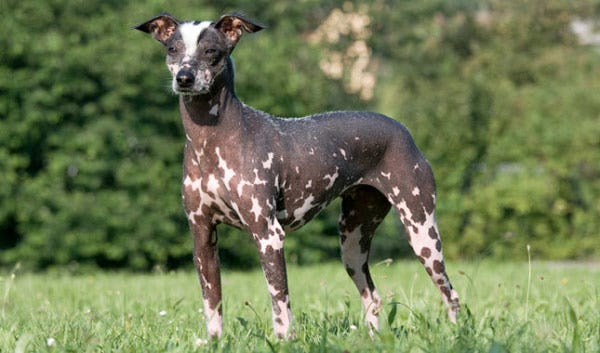 Sometimes known as the Peruvian Hairless or just Orchid, dog owners or dog lovers this hairless dog breed is thought to have originated in Asia. Their name comes from the Spanish who conquered Peru. The explorers named the unique dogs "Perros Flora", or "flower dogs", as they discovered them among the Peruvian Inca orchid houses. 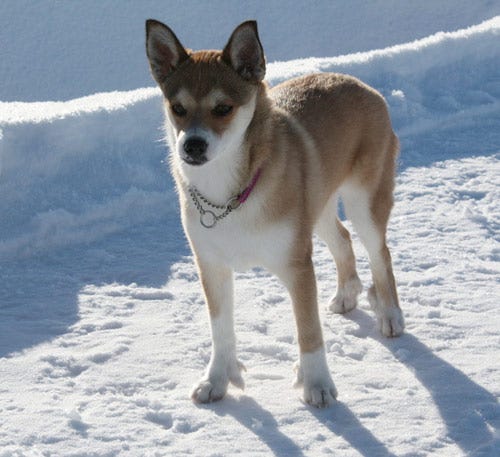 The Norwegian Lundehund may appear normal, but have a look at their feet. These dogs are born with double dewclaws, so they have 6 toes on each foot. But that's not where the weirdness ends. Lundehunds also can turn their heads 180 degrees!

Many dogs have a strip of hackles along their back that becomes visible when they are angry. But this pooch isn't angry. He's a Cambodian Razorback, belonging to a group of dogs with similar bumps on their backs called ridgebacks. The Cambodian Razorback looks distinct from other ridgebacks because of its natural long hair. 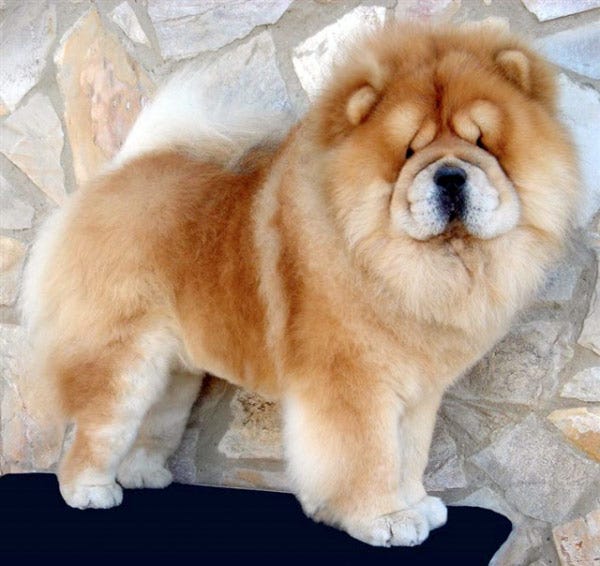 The Chow Chow name means "puffy-lion dogs" and it's easy to see why they are a favorite among pet owners. The Chow Chow is one of the only strange and rare dog breed to regularly have a purple-black tongue and lips. And that's not all. The Chow Chow nose is actually blue or gray, rather than the usual black. 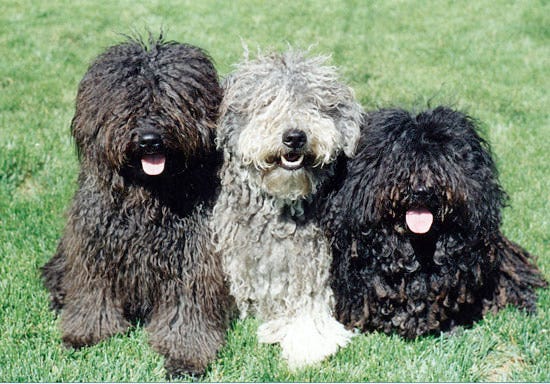 Another dreadlocked dog, the Puli uses its natural matting hair for insulation and all-weather protection. These cords aren't there at birth, though. The curly, coarse hair usually doesn't appear until 9 or 12 months. 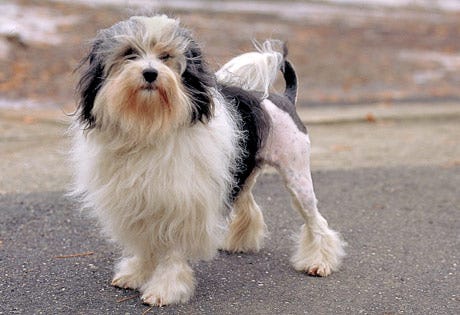 This dog is nicknamed the Lion Dog because of a popular breed haircut. However, in a survey done of Lowchen dog ownership, only 35% actually keep this odd haircut. But it's still weird enough to include in our list. Look familiar? The Lowchen is a part of the common Bichon group of dogs. 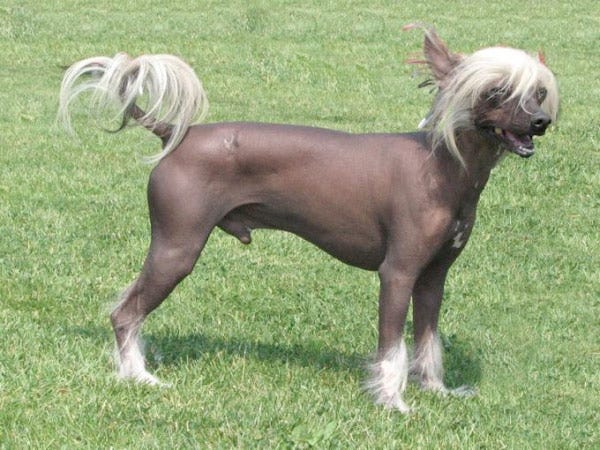 We may have saved the weirdest dog breeds for last. The Chinese Crested dog is one of the better-known weird dog breeds. But not all Chinese Crested dogs are hairless. While some have very little or no hair, some individuals (called "Powderpuffs) have soft, human-like hair. Not actually from China, this breed is thought to have originated in Africa or from the Mexican Hairless (there are some genetic similarities). One origin story is that the Spanish conquistadors of Peru brought them back to China as gifts.

Have you ever owned a WEIRDEST DOG breed? Share with us!

next Can Dogs Eat Raw Eggs? Benefits & Safety of Raw Eggs for dogs

Tips for How to Fatten Up A Dog - How to make your dog fat?

Raw Dog Food for Beginners: How Much Raw Food Should I Feed My Dog?